You are using an out of date browser. It may not display this or other websites correctly.
You should upgrade or use an alternative browser.
A

Yayoi Kusama - when fighting pain, anxiety, and fear trough art is only way to stay alive and create an art which was sold $5 100 000 and became a record amount for a alive artist women.​

From early childhood Yayoi suffered from hallucinations and obsessive thoughts, often that was kind of a suicidal nature. She was born in large family the fourth child in the family.
Her mum was the imperious women who was demanded full submission from Yayoi and often punished her for the a little disobedience, including a physical way. The girl's psyche suffered a lot and she started to have hallucinations and various visions, which nearly brought her to suicide.
In order to somehow find a way of normal living - her psychiatrist recommended her to draw regularly.
Of course mother was actively against of this hobby, and she threw out drawings and continue to punish little Yayoi for drawing.

And when the girl was 10 years old, her mother threw away all her paints, brushes and paper, and said that girl should be only prepared for a career of a housewife.


When she decided to move to USA, her mother (of course) was again against of this idea and as Yaoyoi remember «Mother threw to my face an envelop with an million of yen and said “Here you are, and never cross the threshold of this house again’. She could not imagine how strong Is this girl and what capable for.
Yaoyoi has a long life, full of challenges up and downs but found her unique way of not only survive but to make a brilliant artist carrier. 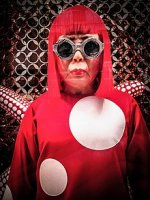 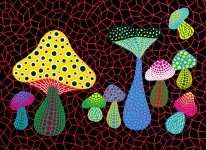