In layman terms, endowment effect pertains to the notion of an emotional bias whereby individuals value objects they own higher than if they did not own them. A very recurring concept in behavioral finance, endowment effect is often termed as a bias investors have while making financial decisions – also known as ownership effect. Endowment effect itself is often connected to loss aversion psychology which states that losses tend to loom larger than gains. Particularly, in finance, research shows that investors often reluctant to part with a poorly performing investment and are less likely to exchange it for a better performing security due to the very same endowment effect.

Before studying the impact endowment effect has on cryptocurrency, it is imperative to understand what cryptocurrency is. In short, cryptocurrency is a digital payment system whereby it is stored in digital wallets and payments are only done as digital entries – running on a public ledger known as blockchain whereby all transactions are recorded and updated. Cryptocurrency includes, but is not limited to Bitcoin – which was the first and to this day, most commonly traded cryptocurrency, Ethereum, Litecoin, Sand, Stranger coin etc.

Endowment effect in finance, particularly crypto states that individuals simply invest in their chosen cryptocurrency not for their utility value but with the belief that the security’s price should increase so they can profit. 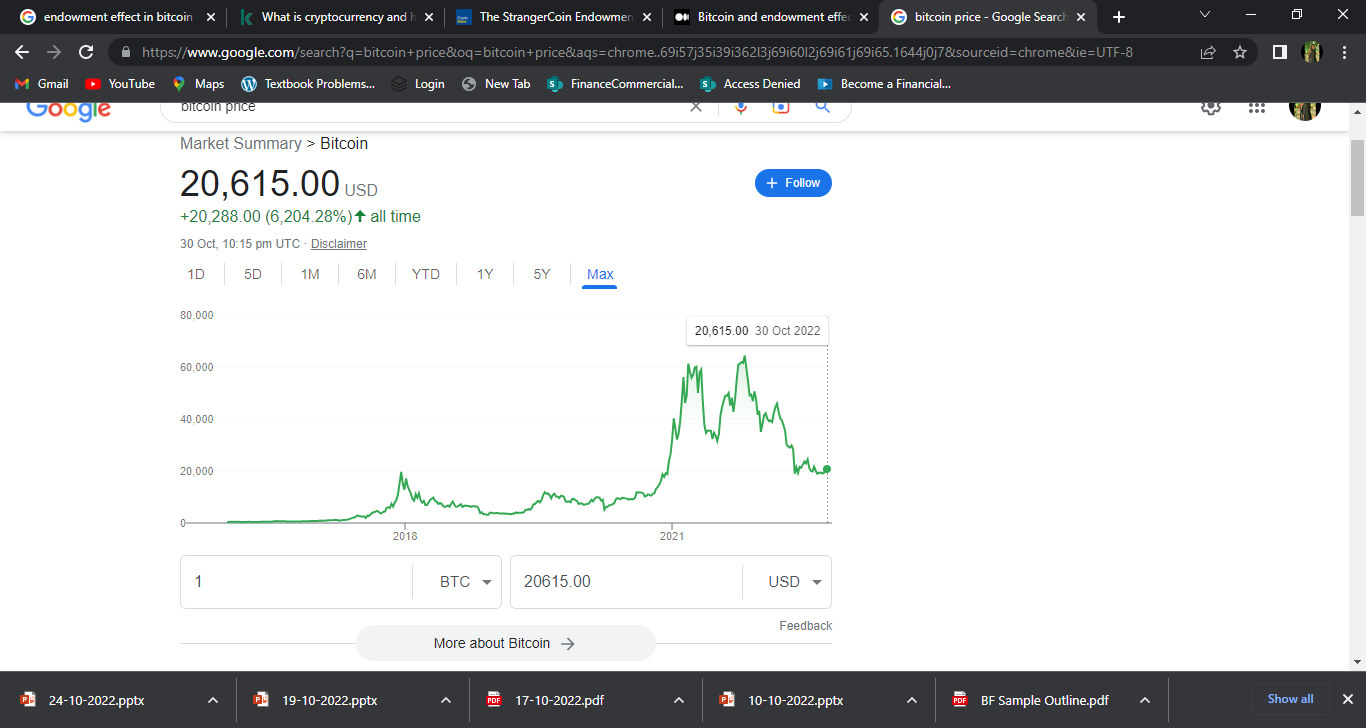 Price of Bitcoin in the last few years

Endowment effect in crypto can be better explained via the graph above whereby bitcoin – as known as BTC rose rapidly in mid 2021 from around 1 BTC = US$ 40,000 to 1 BTC = US$ 65,000 particularly due to launch of BTC ETF in the US however also because primarily the demand of bitcoin was increasing heavily and endowment effect came into play as there were more and more parties investing in bitcoin – leading to more number of ownerships for BTC and causing these investors to hence lead to an increase in the price of bitcoin.


Endowment effect has now helped increase the price of securities and crypto is no different. Stranger coin, a form of cryptocurrency has a particular endowment mechanism that provides price support to the security all through out. Each transaction in stranger coin results in an addition of value in a high yield farm pool which is a small transaction of the transaction being done. Each transaction adds principle to the endowment, and as the principle grows, so does the amount of interest generated by the pool. 10% of that interest is compounded, and 90% is used to buy back and burn Stranger Coin (cryptostars). Hence, each buyback leads to a rise in the price of the token and since it is sourced via the endowment interest, the increase keeps on happening.

To understand better how endowment effect lead to a rise in the price of Stranger Coin, a carefully worked-out statistical model was created to simulate the price of stranger coin over the next 60 months categorized into short term, medium term, and long term subsequently. Data was integrated in to this model for the first month of trading and future values were forecasted via past data keeping other factors constant. A standard farm pool investment was also integrated into the model as a reference point and for comparison purpose. 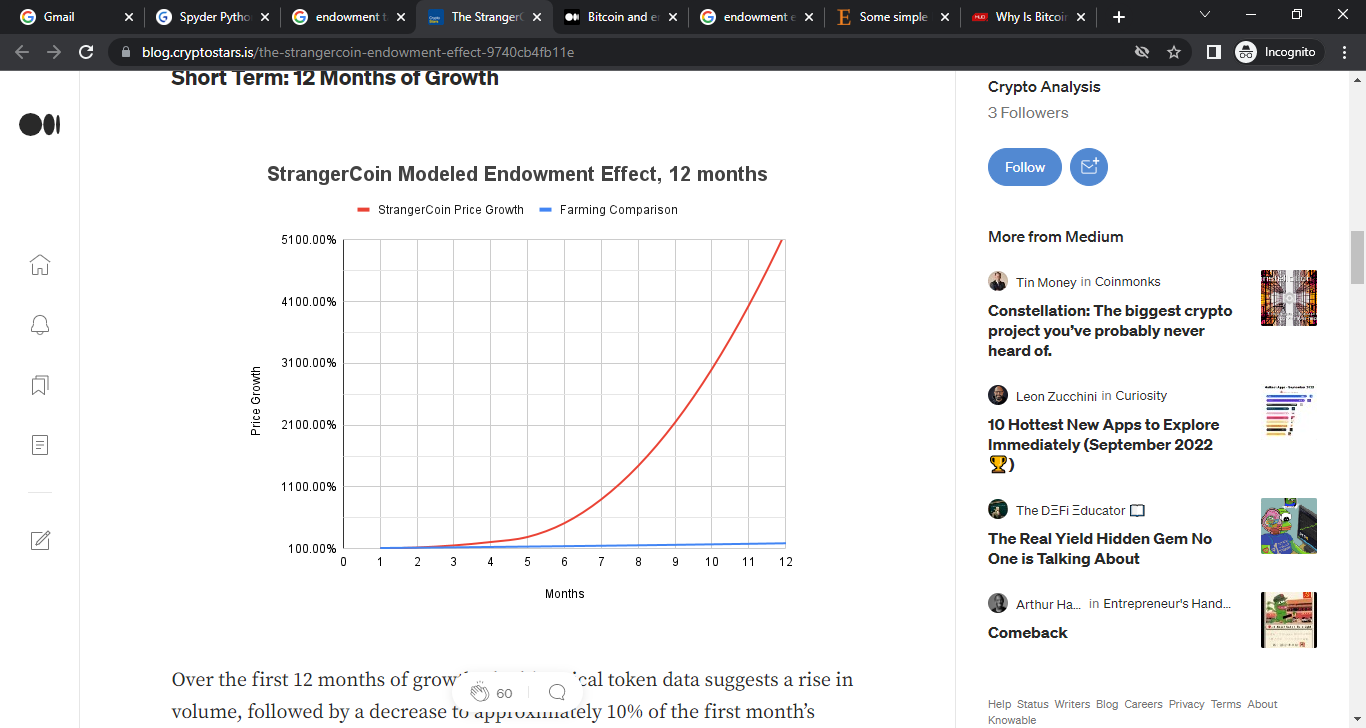 The graph on the right shows the price growth in 12 months suggesting a rise in the volume which helps in provision of influx of principle to the endowment. By the end of 12 months, the modeled endowment effect predicts a price growth of over 5000% as data suggests the endowment principle to be over US$ 400,000 with over US$ 18,000 of Stranger coin bought and burned every 30 days. 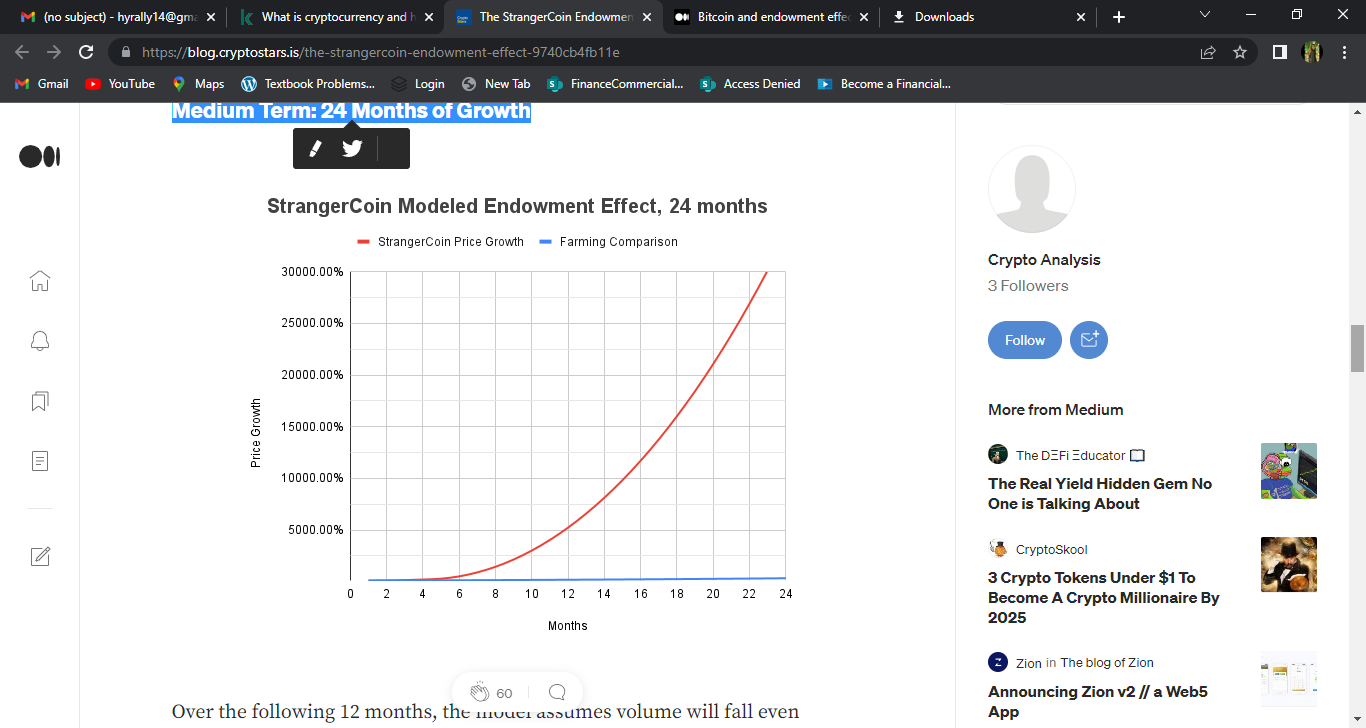 As endowment continues and stranger coin is bought and burn, under domino effect the price will only rise. For the next 36 months, the monthly buy and burn will both increase, with a burn of more than US$ 6000 than before, and hence the price will exponentially rise – the total endowment effect on the price being over more than 300,000% - that is, if all other external factors stay constant.

This constant price growth is so, as buyers invest and sell, they always leave a percentage of their funds to those who shall invest in the future through endowment and hence, any volume that is purchased or sold will only ever increase endowment and eventually the price of stranger coin – meaning instead of completely being dependent on buyers to hold instead sell, the initial volume of stranger coin through this endowment effect becomes the driving force – instead of the other way round.

Similar to cryptocurrency, another form of digital asset are NFTS – non fungible tokens which represent real world objects including art, paintings, games etc and are purchased and sold digitally. Encoded with the same software as crypto, NFTs are one of a kind meaning they cannot be traded or exchanged with another NFT. A report by forbes states that over US$ 174 have been spent on NFTs in the past 5 years – and this rise in price of NFTs is mainly derived from the endowment effect. Since every NFT is unique and one of a kind, and often some emotional attachment exists for every NFT, the owner usually sets a price higher than the market value – in short endowment effect.

In conclusion, endowment effect is well integrated in finance particularly the digital side of finance and capital. Investment by an individual/corporation is mainly performed knowing a security is likely to perform better – or is worth more than being offered and this loop results in what is called endowment effect.
Click to expand...
A
Written by